This week’s nutrition education class with Austin’s only “All kids” yoga studio, The Little Yoga House, was so much fun! After all, who doesn’t like a popcorn party where you air-pop the popcorn?!

The kids arrived and the room already smelled of yummy popcorn–was that the inner teacher in me trying to motivate my kiddos to get pumped about following lesson? I think, yes!

We learned a lot about popcorn–it’s not just tasty but supplies us with a good source of fiber and antioxidants as well! The kids were all given a ziplock of popcorn kernels and instructed to close their eyes, smell, touch, and taste the kernels. Popcorn isn’t as fragrant and tasty until you add heat and transform the kernels into popcorn.

After a brief moment to share our favorite popcorn stories and learn some cool popcorn facts, we headed outside to play a popcorn game. Soooo cute!

The kids were placed on two teams. The first person in each line had cups rigged to their shoes (rubber bands and paper clips) and had to carefully run/walk the popcorn filled cups to the opposite end of the yard to dump the popcorn onto the tray. Since the kids were little bitties (3-5 yrs) there was no winner but lots if silly fun. 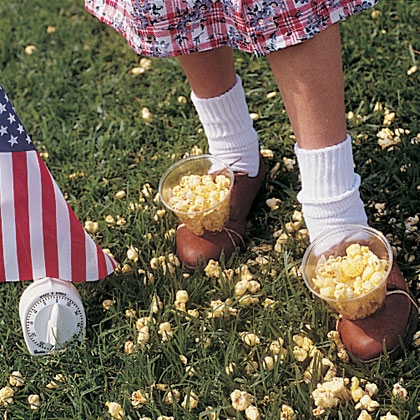 We then headed back into the studio to break off into groups. In each group the kids decorated their popcorn bags while the teachers went around to poll the crowd about what makes them love popcorn. We recorded their answers onto popcorn paper cutouts and then pasted them to page two of our giant classroom book (that documents what we learn in each class.)

We finished up with allowing the kids to dump their kernels into the air-popper and had a good ‘ol fashioned popcorn party. They had 3 different seasoning to choose from to flavor their popcorn with: cumin & cinnamon, salt & lime, or taco seasonings.

Until next time, keep eating well and having fun!